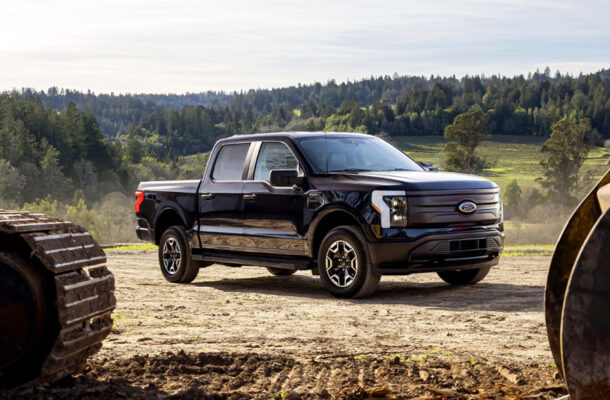 The 2022 Ford F-150 Lightning is the first full-size electric pickup truck offered by a major automaker. While it is a close relative to gas-fueled versions of the F-150 pickup, the F-150 Lightning comes only with an electric powertrain that provides traction to all four wheels.

Heavy hauling will dent electric range, but the F-150 Lightning offers an EPA equivalent of 70 mpg combined with the extended-range battery pack. Charging is quick when hooked up to a Level 3 DC fast charger: figure about 45 minutes to go from 15 to 80% charge. Home charging when attached to a Level 2 240-volt outlet runs between 15 and 20 hours to top off a battery pack at 15% charge, or about 13 miles of range per hour of charge. A 48-amp or 80-amp circuit can slice those charge times dramatically, and Ford’s Home Integration System can utilize the truck’s battery as a backup power supply for a house in a pinch.

The IIHS and the NHTSA have yet to crash test the F-150 Lightning, though the gas-fueled truck has generally performed well. Weighing in about 6,600 lb, the electric version may fare even better. Automatic emergency braking with pedestrian detection, active lane control, blind-spot monitors, rear parking sensors, and automatic high beams are standard, while a surround-view camera system and Ford’s limited hands-free driving system called Bluecruise are on the options list.

The extended-range battery pack means first stepping up to the XLT for about $10,000 more and then adding another $19,500 for the big battery. The XLT also has dressier interior trim and cloth upholstery over power-adjustable front seats. Lariat models run about $15,000 more, which buys leather seats, a power tailgate, and a vertical 15.5-inch touchscreen, plus a big sunroof. The automaker’s driver-assistance tech is optional.

The lineup peaks with the $91,000 Platinum, which comes only with the big battery and adds a downright decadent leather-lined interior with the 15.5-inch touchscreen, Bang & Olufsen audio, and massaging front seats.

An onboard generator comes on all grades, though its power output ranges from 2.4 to 9.6 kw.

The F-150 Lightning makes little effort to flash its eco-friendly credentials. It comes only in crew-cab form with a short 5-foot-6 bed. Underneath, there’s a beefed-up frame to accommodate the electric powertrain’s heft, but outside the F-150 shares most of its panels with the standard F-150. The only differences include a front fascia with a tech-heavy look with LED running lights, different taillights, and unique wheel designs. That light bar up front gives way to a weathertight trunk – but more on that later.

Only wheels and brightwork differentiate trim levels for the most part. F-150 Pro models ride on 18-inchers, which grow as large as 22 inches as you work up the food chain.

Aside from its instrument cluster, the F-150 Lightning is nearly identical to the standard gas-fueled model inside, too. Pro and XLT versions come with a 12.0-inch display that grows to a huge 15.5 inches in Lariat and Platinum versions.

The crew-cab configuration is comfortable and spacious, with nice interior trim and genuine stretch-out space in every seat. In addition to the big open bed at the rear, the front trunk – or frunk – accommodates about 14 cubic feet of cargo.

Living up to its name in more ways than one, the F-150 Lightning offers blistering electrified performance. It’ll scoot to 60 mph in just 5.0 seconds with the standard battery pack, or half a second quicker with the optional pack. Consider that for a second – a 6,600-pound pickup that gets to highway speeds as rapidly as a new Porsche 718 Boxster.

That’s all thanks to power ratings between 452 and 580 hp, plus 775 lb-ft of torque. Even with power transferred to all four wheels, the big, wide tires can be coaxed into a chirp from a stop.

Even though there’s no low range, the F-150 Lightning offers an electronic locking rear differential to help distribute power between the rear wheels in muck or snow, and skid plates protect the undercarriage.

Ride quality is spectacular thanks in part to rear coil springs in place of more pickup-typical leaf springs. With no internal combustion engine rumbling underhood, the F-150 goes about its business in near silence, too.

The Ford F-150 Lightning is a turning point for both pickups and electric vehicles. It’s not a stretch to call it Ford’s best F-150 yet, even though its price tag can rise to eye-opening levels.