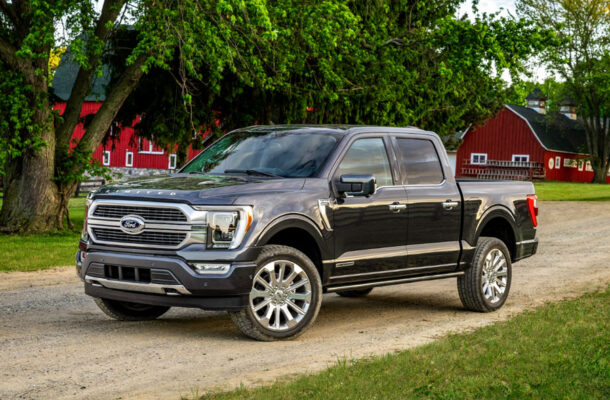 The 2022 Ford F-150 is a full-size pickup available in a dizzying array of configurations suited to everything from work to play and just about everything in between.

This year, Ford adds a few styling and bed-utility packages but otherwise leaves this perennial bestseller alone in anticipation of an all-electric version called Lightning that will soon join the lineup.

The F-150 range comes in six different powertrain choices, including several V-6s and V-8s that can lug as much as 14,000 pounds of trailer when properly equipped. Power-wise, the F-150 lineup stretches from a 290-horsepower base V-6 up to 450 hp from a twin-turbo V-6 in the Raptor, though an early favorite may be the hybrid with its 430 hp net and on-board generator that can power a house in a pinch.

Fuel-economy wise, the F-150 range runs the gamut. The most common 2.7-liter turbo-6 is rated as high as 20 mpg city, 26 highway, 22 combined, though four-wheel drive nicks those figures to 19/24/21 mpg. Hybrids are rated at 24 mpg with four-wheel drive, while the thirstiest V-8 version slips to 19 mpg combined.

Ford is justifiably proud of the F-150’s safety record, including a Top Safety Pick score from the IIHS (when fitted with LED headlights) and a five-star overall rating from the NHTSA. Standard fare includes automatic emergency braking, automatic high beams, and active lane control, while a driver-assist system that allows for limited hands-free driving is optional on high-end versions.

The F-150 is offered in an astonishingly wide range of versions, including eight basic trim levels – XL, XLT, Lariat, King Ranch, Platinum, Limited, Tremor, and Raptor – each of which can be further outfitted with myriad optional extras including different cab and bed configurations, two- or four-wheel drive, and various engines.

The lineup starts around $31,500 for the base XL, which has more features than you might expect. Look for crash-avoidance tech, an 8.0-inch touchscreen with Apple CarPlay and Android Auto compatibility, air conditioning, and crank windows.

The XLT starts closer to $40,000, money that buys brighter trim outside and power features inside, plus the option to add way more features.

Drivers looking for a little luxury will want to pony up at least $49,000 for a Lariat with its leather seats, dual-zone climate control, 12.0-inch touchscreen, 18-inch alloy wheels, keyless access and start, and a standard trailer hitch.

King Ranch and Platinum versions run upward of $60,000. Though equipped about the same, the two trucks have different personalities – and lots of luxuries.

They may not be true special editions, but the Tremor and Raptor kind of feel like it. The Tremor goes for light-duty off-road use with its skid plates, recovery points, monotube shocks, and all-terrain tires. Raptors are built for serious four-wheeling. Look for a widened stance and special Fox shops, plus a host of traction-aiding features that make four-wheeling a cinch.

The more you spend, the dressier your F-150 can look. All share the same basic three-box shape and many trims offer standard-, extended- and crew-cab configurations paired with various bed lengths. Available options range from different types of bedliners to a power-operated tailgate fitted with a step.

Inside, the F-150 has a beautifully-wrought interior – at least in top trims. The base XL has rubber flooring and vinyl upholstery, while Platinums and King Ranch models are decked out with ultra-soft leather and open-pore wood trim. Each version has its purpose.

Crew-cab trucks are by far the most popular, and they’re offered with either a front bench seat or individual buckets separated by a configurable center console. In top trims, the front seats are like first class airline seats, minus the cocktails and bowl of warm nuts.

It may look like a truck, but the F-150 doesn’t have to be cumbersome. Sure, there’s no masking its heft around town, but these pickups are masters when it comes to open-road cruising.

The base V-6 is fine, but the 2.7-liter turbocharged V-6 is a worthwhile upgrade that offers more towing confidence. The 400-hp 5.0-liter V-8 has an old-school feel and a NASCAR soundtrack, but we prefer the rapid 3.5-liter twin-turbo V-6 thanks to its mountain of torque and even better trailer-towing rating.

Ford’s well-executed hybrid pairs the top V-6 with an electric motor for more power and electric-only driving up to 10 mph, plus a useful on-board generator.

Standard rear-wheel drive can be upgraded to part- or full-time four-wheel-drive systems. In Raptor guise, the F-150 can slay any trail it’ll fit down.

With available adaptive dampers, the F-150 has a luxury car-grade ride, though it can be a little bouncy with an empty bed.

It’s easy to see why the Ford F-150 is so popular. These big trucks offer a version for any driveway.

–by Andrew Ganz, with driving impressions from The Car Connection