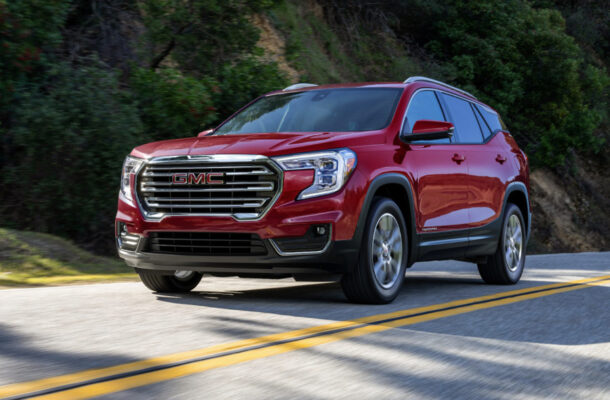 The five-seat 2022 GMC Terrain crossover is the entry-level SUV in GMC’s lineup of trucks and utility vehicles. It’s the family wagon of the bunch.

The Terrain looks contemporary and sleek even with its chunky grille and big C-shaped headlights. The cabin is composed even on base models, and sophisticated on the Denali with leather upholstery and woodgrain trim.

There are some significant changes for 2022. Consistent with a trend in the industry, the base SL model has been dropped. There’s a new front end with fresh LED headlights. An AT4 edition has standard all-wheel drive and a front skid plate, while the SLT and AT4 can get a Tech Package with a surround-view camera system and a head-up display.

Regrettably, the 252-horsepower turbo-4 engine has been dropped. The only engine in the 2022 Terrain is a less powerful 170-hp turbo-4. Mated to a 9-speed automatic transmission, the acceleration is merely adequate. The Terrain steers with precision and rides well, but its optional all-wheel-drive system is a manually engaged setup that leaves something to be desired.

Four adults fit well in the Terrain, which has 29.6 cubic feet of cargo space behind the rear seat, and 63.3 cubic feet when that seat is folded.

Made in Mexico, the $29,095 Terrain SLE has cloth upholstery, keyless start, 17-inch wheels, and a 7.0-inch touchscreen with wireless Apple CarPlay and Android Auto. All-wheel drive is $1,600 more.

The Terrain’s mix of glitz and guts strikes the right note. It fuses a contemporary shape with rugged details. It puts distance between itself and GMC’s big trucks and SUVs. It puts up a rugged front but behind the grille the flowing body looks crossover all the way, with its floating roof and blacked-out rear pillars.

The truck-like cabin has blocky shapes and big controls. But it’s handsome, framed in low-gloss materials and stitched with fine leather in the Denali edition. There’s good storage in the center console, thanks largely to the pushbutton transmission that takes up very little space. Most versions wear appealing materials; Denali Terrains are especially well-trimmed. GMC’s touchscreen infotainment wins our kudos, too.

In front, there’s a good 54.4 inches of hip room. The seats have power adjustment and thick bolsters for great comfort on long road trips, though a longer seat bottom would be nice.

Three adults won’t fit easily across the back seat, but thanks to 39.7 inches of leg room, two large people have enough space. The rear bench seat isn’t cushy enough, but it folds down to convert the cargo space from 29.6 cubic feet to 63.3 cubic feet.

Outward vision to the rear quarters gets blocked by the stylish rear-end design.

The Terrain isn’t going anywhere fast, without its former 252-hp turbo-4. The only powertrain is a 170-hp 1.5-liter turbo-4 mated to a 9-speed automatic. There is a plump 203 lb-ft of torque, but the Terrain weighs between 3,450 and 3,670 pounds, and that’s a drag on acceleration. It trundles around the city well enough, but gets breathless when pressed to pull higher speeds or up hills, especially with passengers aboard.

The available all-wheel-drive system, standard on the AT4 and Denali Terrain, is a simple setup that requires manual activation through a console-mounted controller. It’s a less expensive system that defaults to its highest fuel economy potential. Off-roading and towing (a max rating of 1,500 lb) aren’t the Terrain’s priorities, never mind the AT4’s front skid plate.

The Terrain is merely a pleasant commuter crossover with some rugged styling cues. It’s made pleasant mostly by the smooth and composed ride, and steering that’s responsive and quick. That good suspension tuning holds true whether it’s shod with base 17-inch wheels and tires or the Denali’s 19-inchers.

We miss the 2022 GMC Terrain’s stronger turbo-4, but otherwise it’s a handsome SUV, with good ride quality and responsive handling, decent gas mileage for its size, and a cabin that looks great in full-zoot Denali spec.