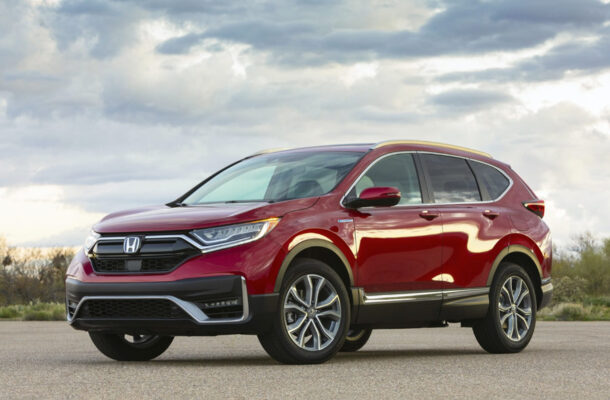 The Honda CR-V is a relatively roomy compact crossover, comfortably seating five passengers in a generous and safe cabin.

Since a redesign is anticipated for next year, the 2022 CR-V hasn’t changed much.

The top model, called Touring, comes standard with all-wheel drive, as does the Hybrid.

The primary engine is a 1.5-liter turbo-4 making 190 horsepower and 179 pound-feet of torque, mated to a continuously variable transmission. The AWD Hybrid has a 2.0-liter non-turbo 4-cylinder engine along with two electric motors to make a total of 212 horsepower. It’s not only punchier than the 1.5-liter turbo, it has a smoother ride. And of course it gets better gas mileage, being EPA rated at 40/35/38 mpg.

The 1.5-liter is rated by the EPA at 28 mpg city, 34 highway, 30 combined with front-wheel drive, and 1 less mpg with all-wheel drive. That’s good enough to make the Hybrid a bit less compelling, although if you compare just the city rating of 28 mpg versus 40 mpg, the Hybrid has a clear edge as an around-town commuter.

With five stars from the NHTSA in crash tests, and a Top Safety Pick from the IIHS, the CR-V scores great for a compact. And the list of standard safety equipment is excellent, including automatic emergency braking, adaptive cruise control, active lane control, and automatic high beams. However, it’s only the Touring and Hybrid that earn the Top Safety Pick, thanks to their LED reflector headlights.

Made in Indiana, the CR-V comes in LX, SE, EX, EX-L, Touring and Hybrid models. The CR-V is front-wheel drive, with all-wheel drive optional for $1,500 except on the Hybrid, where it’s standard.

Unlike with some other Hondas, for 2022 the stripped-down base model still lives. The LX for $26,975 comes with cloth seats, a very small 5.0-inch display screen and 17-inch wheels.

At the top of the lineup, the $36,775 AWD Touring has leather upholstery, 19-inch alloy wheels, LED headlights and fog lights, roof rails, a 9-speaker sound system, and wireless smartphone charging.

The CR-V wears a slim strip of headlights and black cladding over its wheel wells, with 17-inch wheels standard or 19-inchers optional, and there’s a little bit of chrome on the sides. The grille is modest, unlike many crossover SUVs, and the rear end is vertical, also unlike many crossovers with slants and sculpting. The thin rear roof pillars lift and lighten the verticality.

The instrument panel’s controls are mounted high and are easy to reach, while being in a V pattern. A shift lever lives in a forward position on the console, except on the Hybrid, which uses a tidy button to change gears. The compartments in the console are deep, as are the door pockets, so storage is good. The soft-touch materials improve as the price rises, at their best with the wood trim in the Touring.

The seats in the LX and SE are upholstered in cloth and adjusted manually, but they are supportive and comfortable even for long hours of driving. A tall seating position and low dash under the broad windshield combine to create an expansive forward view. The EX and Hybrid bring a 12-way power driver’s seat with lumbar support, while the EX-L and Touring have leather and power adjustment for the passenger.

The CR-V cabin feels bigger than its footprint says it is. Five adults can ride in comfort, with three in the rear bench, easily climbing in through wide doors. Somehow Honda has found 40 inches of rear leg room, along with 40 cubic feet for cargo (33.2 cubic feet in the Hybrid because of its battery pack) with a low load floor. And when the 60/40-split rear seat is folded, that nearly doubles to a vast-for-a-compact 75.8 cubic feet.

The small turbo engine delivers enough acceleration to satisfy, if not thrill. At 1.5 liters, it makes 190 hp and 179 lb-ft of torque, which allows the power to be available at low engine speeds, and the power stays solid as the revs increase. It’s not exactly quick, but it can handle passing on a two-lane or merging into a hole in traffic on the freeway.

The engine is mated to a CVT that doesn’t have simulated steps to make it feel like an automatic transmission. But it still manages to prove the appropriate power, and doesn’t deliver the dreadful droning of older and inferior CVTs.

All-wheel-drive is optional, standard on the Hybrid. The system is good in snow and ice, but not meant for off-roading, other than maybe a dirt trail that isn’t too difficult. There’s a decent 7.8 inches of ground clearance.

The feel of the steering is good, and the handling is tuned well. The CR-V will lean a bit in turns, but it never feels bigger than it is. The ride is composed and calm, on a suspension with struts in front and double wishbones in rear.

The Hybrid is smoother, with its stop/start system. The powerplant is a 2.0-liter I-4 engine teamed with two electric motors whose power comes from a pack of lithium-ion batteries. The total horsepower is 212, which is 22 more than the 1.5-liter turbo. The hybrid is also all-wheel drive. It’s slightly quicker, but not much, because it’s heavier.

There are many reasons the Honda CR-V has been a bestselling SUV for years: efficiency, safety, comfort, and space. Stick with a version with a bigger touchscreen—and if you want all-wheel drive, the Hybrid’s a great choice.