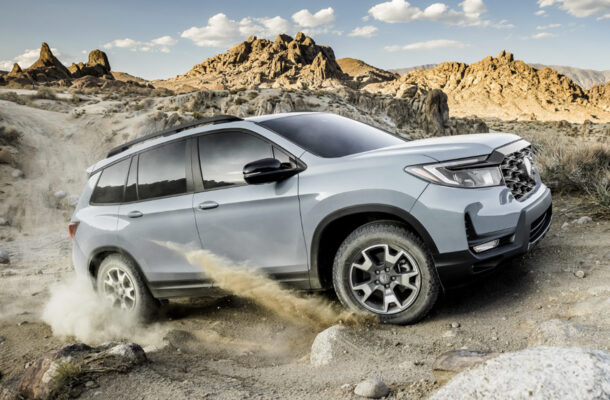 The Honda Passport is a rugged mid-size crossover SUV that seats five, with a higher-than-average suspension and approach/departure angles that give it some off-road capability, but don’t detract from its everyday comfort. It’s also a bit bigger than the average mid-size crossover, with a roomy cabin having excellent cargo space, and it comes with good standard safety equipment.

For 2022 it has been slightly restyled, most noticeably with a new hood and grille that resembles that of the Ridgeline pickup truck, and all new wheels. The grille is a bit more aggressive than before, moving the Passport a step away from its family-oriented three-row sibling, the Pilot.

For 2022, as Honda has done with the Pilot, two models have been discontinued (Sport and Touring), which moves the EX-L into position as the new entry-level model. But there’s a new model called the TrailSport, with cosmetic changes to suit the name, and standard all-wheel drive. If you want just the cosmetics, there’s a trim package from HPD (Honda Performance Development) that includes black fender flares, wheels, graphics, and a unique grille.

There are also a couple more features for 2022, including reminder bells when something is left in the rear seat, and wireless phone charging.

The Passport has one powertrain, a smooth 3.5-liter V-6 making a solid 280 horsepower, mated to an equally smooth 9-speed automatic transmission. The EX-L is front-wheel drive, while the TrailSport and luxury Elite are all-wheel drive.

The FWD models earn the best EPA ratings, 20 mpg city, 25 highway, 22 combined, a number that’s arguably the Passport’s biggest weakness. With AWD, those numbers don’t go down much: 19/24/21 mpg. A hybrid would be welcomed to make it a better vehicle for small families on a budget.

It earned a full five-star overall rating from the NHTSA, though it only got four stars for its frontal crash impact performance. The IIHS gave it a “Good” crash test rating for all but the small overlap front test, where it earned an “Acceptable” grade.

Made in Alabama, for 2022 there are three models, the EX-L, TrailSport and Elite. The latter two come standard with all-wheel drive, while it’s optional on the EX-L for $2,100.

The EX-L starts at $39,095. The EX-L has leather seats heated in front, an 8.0-inch touchscreen with Apple CarPlay and Android Auto compatibility, wireless phone charger, roof rails, and a power liftgate.

The TrailSport for $43,695 comes with all-wheel drive and a more rugged appearance.

Certain elements of the Passport shrink the appearance of its size, which is a fairly long 190 inches. The larger grille isn’t one of them, but the front fascia is unpainted for one thing, and there’s a slash on the short tail from the fenders to the roof, along with a new rear bumper and bigger exhaust tips.

The TrailSport has its own bumpers and badging, with 18-inch wheels in a handsome pewter color. The track is wider by 0.3 inches, too small to notice.

The interior is organized nicely, with an open feeling in front, where the center console is deep and wide for good storage space. New for 2022 are standard leather and an 8.0-inch touchscreen. The only thing we might nitpick about the trim is that it seems to be mostly dark, and the cabin could be brighter.

The Passport is based on the larger Pilot, and while being six inches shorter it still offers great cabin space. Five adults can fit comfortably, which means the rear bench seat is not only roomier than rivals, with 39.6 inches of leg room, but also nicely supportive. It’s the front seats that need more padding and contour, a situation that’s the reverse of most cars, whether crossovers or sedans.

The Passport makes no attempt to seat seven with a third row, instead offering an absolute ton of cargo space behind the second row. There’s 41.2 cubic feet to be exact, and when the rear seat is dropped it blows up to 77.7 cubic feet, enough for many great activities for two people. Also, under the cargo floor, there’s a large space for things you might want to hide, such as cameras or computers.

The 3.5-liter V-6 is Honda’s stalwart engine. In the Passport it makes a solid 280 horsepower that always provides acceleration when it’s needed. It’s mated to a 9-speed automatic whose delivery is nearly as reliable, although sometimes the downshifts for passing are a beat behind the driver’s demands.

Despite being the most adventure-oriented vehicle that Honda offers, with its 8.1 inches of ground clearance (with AWD) and shorter front and rear overhangs, the Passport is still primarily a crossover for the road. Out on the highway, the ride is smooth and the cabin quiet, which makes long trips pass in time that goes surprisingly fast.

But make no mistake, it’s at home on trails that aren’t extreme, even for example where we got some seat time, the red rocks of Moab, Utah. AWD is standard on the TrailSport and Elite, and available on the EX-L. There are driving modes for Sand, Snow, and Mud which alter the response of the powertrain and the AWD behavior, but the Passport doesn’t go farther, into the serious off-road realm of two-speed transfer cases or locking rear axles.

The 2022 Passport’s TrailSport trim promises adventure, but this five-seat crossover is at its best on the open highway. It’s a solid alternative to a three-row SUV if you don’t need that many seats but still want the cargo space and safety gear.