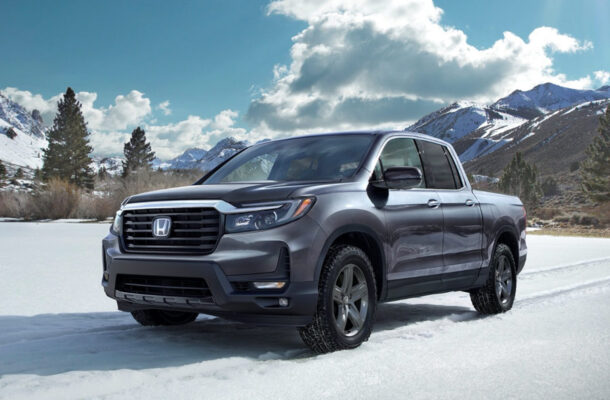 The Honda Ridgeline is one of the most car-like pickup trucks on the market. It’s a five-seat four-door relative of the Honda Pilot, with good leg room for the rear passengers and an instrument panel identical to the Pilot’s. Fresh from an update one year ago, it’s unchanged for 2022.

One feature that isn’t totally car-like is all-wheel drive in every model, although the AWD system is like a car’s in that it’s intended for security on slippery roads, not off-road adventures.

The 5-foot bed is made of a lightweight composite, and it’s innovative, with a cooler under the floor and a tailgate that can drop down like a truck or swing sideways like a door.

With a car’s unibody construction, the ride is as smooth as a car, and that’s maybe the main reason it’s so popular: it offers the best of both worlds for those who might like the carrying utility of a truck but don’t need the extreme t.

The Ridgeline’s fuel economy is only so-so, EPA rated at 18 mpg city, 24 highway, and 21 combined.

Made in Alabama, the Ridgeline comes as Sport, RTL, RTL-E and Black Edition models.

The Sport starts at $38,115 and comes with cloth seats, keyless start, 8.0-inch touchscreen with Apple CarPlay/Android Auto, LED headlamps and 18-inch wheels.
For $2,800 there is a cosmetic package from HPD that gives some substance to the name “Sport.”

The RTL-E adds navigation, wireless phone charging, parking sensors, and a premium sound system with speakers in the bed for tailgate parties.

The Black Edition at $45,545 lives up to its name, adding a black grille, black trim, 18-inch black alloy wheels, and black leather upholstery with red stitching.

Like a truck, the grille is wide and tall between LED headlights and fixed under a chrome bar. The black cladding over boxy wheel arches with 18-inch wheels adds a presence.

A very visible skid plate sits between vents that flow air from the bumper around the front wheels. We like the twin exhaust pipes that come out from the rear bumper.

What this Ridgeline does better than the older model is look like a truck. Its cleverly stamped body panels make it look like the bed is separated from the cab, even though it’s not.

It might look like a truck on the outside, but not in the cabin, which is Pilot all the way, especially the dashboard and instrument panel with 8.0-inch touchscreen, as well as the console that features a pushbutton gear selector. The instrument panel lacks big knobs and controls, just a smaller audio knob and climate switches, and the console lacks big storage, but elsewhere there are a lot of bins.

The front seats are supportive and comfortable. The Sport’s are cloth and can’t be upgraded with heat and power adjustment, while the RTL comes with leather and those comforts.

The rear seat can fit three adults, so it lives up to its crew-cab billing, and offers them nearly 37 inches of leg room, plus storage under the bench seat. It’s a 60/40 split that can flip up, enabling big things from bikes to dogs to fit, if you don’t want to carry them in the bed.

The composite bed is 5 feet long and 50 inches wide, which is wider than a sheet of plywood but not longer, so the plywood will have to be supported by the top of the tailgate; don’t forget to attach a red flag. The tailgate can be dropped or swung out on the driver’s side. A nice innovation is the lockable space under the floor of the bed, which can be reached by a person standing behind the rear bumper; it even has a drain plug for water from melted ice if it’s used as a cooler. The high-end models get a charger in the bed and speakers to bring music outdoors.

The Ridgeline is quick, capable and comfortable. Acceleration is good from the 3.5-liter V-6 that makes 280 horsepower.

Power comes on later in the rev range, but the 9-speed automatic doesn’t keep the engine there too often and it hesitates when downshifting out of overdrive for passing moves at cruising speeds. The V-6 makes 262 lb-ft of torque, enabling it to tow 5,000 lb—same as a Pilot—and has a payload of about 1,500 lb, depending on how it’s equipped.

The ride is better than mid-size trucks with body-on-frame structure, and the steering is more connected to the road. That’s the Ridgeline’s reason for being, the virtue of its unibody/crossover structure. It feels smooth on most road surfaces.

The standard all-wheel drive isn’t intended for off-road, but rather for better stability on slippery pavement. Still, three of the four driving modes are for non-pavement: Snow, Mud, and Rock, plus Normal. They distribute power between the front and rear, and also adjust throttle response and transmission shifting. There’s 7.7 inches of ground clearance, a bit more than the Honda Pilot but less than many crossovers.

The 2022 Honda Ridgeline does what it’s designed to do, which is bring a truck’s carrying ability to the comfort of a car (or vice versa). It’s at its best in Sport or RTL trim.