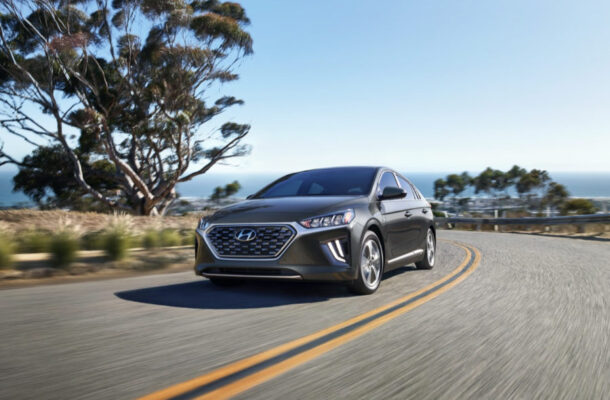 The 2022 Hyundai Ioniq is a small hatchback with a frugal hybrid powertrain. Its sleek looks outside mask a spacious cabin, but the real selling point here is just how little fuel the Ioniq can use.

It’s offered in both standard hybrid – with gasoline and electric motors – and a plug-in version with an upsized battery that gives it as much as 29 miles of all-electric range, per the EPA. After that range is depleted, the plug-in hybrid drives much like the standard model.

A fully-electric version was offered last year but was dropped in favor of the unrelated Ioniq 5, which does not come as a hybrid.

As you might imagine, the Ioniq uses very little gas. Most versions rate 54 mpg city, 57 highway, 55 combined, according to the EPA. The base Blue version is greener thanks to special tires: 58/60/59 mpg.

Good crash-test ratings from the IIHS are countered by no data from the NHTSA, which has yet to test the Ioniq. We do know it will do a good job of avoiding a crash, though, thanks to standard automatic emergency braking.

The Ioniq costs about $25,000 to start in Blue trim, which includes power features, automatic emergency braking, automatic climate control, and an 8.0-inch touchscreen with Apple CarPlay and Android Auto. It’s a lot of value at that price.

A range-topping Limited trim dresses the cabin in leather and adds a Harman Kardon audio system with navigation.

Plug-in Ioniqs are a bit different, skipping the base Blue trim for an SE outfitted like the standard model but with adaptive cruise control for around $28,000. The SEL and Limited trims command a similar premium, topping out a little above $34,000.

One note: plug-in hybrid versions may qualify for tax credits in certain municipalities and for certain buyers. That may make them cheaper than the standard Ioniq.

The Ioniq wears simple, handsome, and organic lines that won’t stand out in a parking lot. Maybe that’s the point.

The sloping roofline is designed to cut through air, not garner second looks. As a result, the Ioniq is decidedly slippery, which improves its fuel efficiency. So too its wheel designs, which may look a little unconventional but have been through the full wind-tunnel rigmarole.

Inside, these hatchbacks have a simple design with no excess of flair. An 8.0-inch touchscreen integrates well in the dash in most versions, though Limiteds with navigation swap in a 10.3-inch display.

Fabric seats are standard, while leather comes with the Limited trim. The seats themselves are comfortable enough for all-day cruising. In back, you’ll find good room for two passengers, though three may be a bit tight. The upside to that is impressive cargo space. Look for 26.5 cubic feet in hybrids, or a bit less thanks to the bigger battery fitted to plug-in hybrids.

The Ioniq is designed to deliver maximum fuel economy, not driving smiles. In this respect, it delivers admirably.

Between its 1.6-liter inline-4 gas engine and its electric motor, it sends 139 net hp to the front wheels through a 6-speed dual-clutch automatic transmission. Thanks in part to a low curb weight – about 3,000 pounds – the Ioniq never feels slow. The electric motor helps ensure that power is delivered quickly, with a minimum of engine revving.

Plug-in hybrid versions drive in much the same fashion, with a hint of improved acceleration due to their larger battery packs.

The car’s ride quality is soft and absorbent, but never sporty. Even the steering gives little feedback.

The 2022 Hyundai Ioniq is an ultra-thrifty choice with pleasant manners and subtle blend-in styling. For drivers looking to save fuel without making a big statement, it’s a very strong choice.