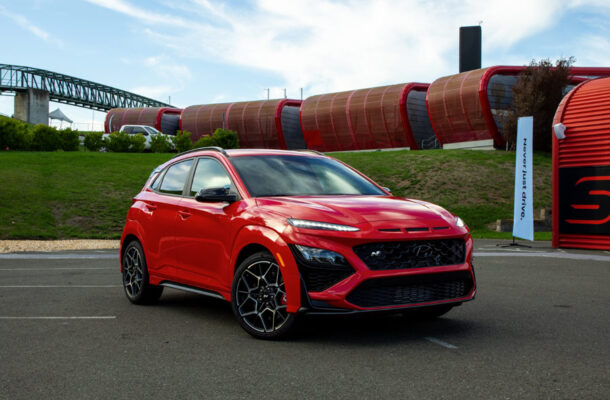 Available in an unusually wide variety of flavors, the 2022 Hyundai Kona is a small five-seat crossover SUV with a spunky personality.

This year, the Kona sees fresh styling outside and a few tweaks inside, plus the addition of a new N-Line appearance package and a Kona N performance model. The Kona is also available in an all-electric configuration.

Most Kona models use a 2.0-liter inline-4 rated at 147 hp, while N-Line and Limited versions step up to a 195-hp turbo-4. The Kona N draws its inspiration from the Veloster N and Elantra N with its rorty 276-hp turbo-4. All models except the Kona N can be had with all-wheel drive.

All models earn a five-star crash-test rating from the NHTSA and top marks from the IIHS. All Konas come with standard automatic emergency braking and active lane control. The SEL and above add blind-spot monitors, while adaptive cruise control is available on higher-end models.

At a hair over $27,000, the Kona N-Line adds the mid-level turbo engine plus sportier styling and a digital instrument cluster. Another $2,500 buys the Tech Package with its 10.3-inch touchscreen, Harman Kardon audio, sunroof, adaptive cruise control, and LED exterior lighting.

For just under $30,000, the Kona Limited also makes use of the turbo engine, but it goes in a more luxurious direction with its leather upholstery. It includes many of the features optional on the N-Line including the upsized infotainment screen and adaptive cruise control.

The Kona N exists in its own space for about $35,200. It comes only with front-wheel drive and it features most of the features available on the N-Line in a single configuration. You’ll need only pick your color – red, white, or black.

More like a chunky hatchback than a squat SUV, the Kona has attention-grabbing looks. Most versions have plenty of unpainted lower cladding that lends a rugged look – albeit not one backed up by any serious four-wheeling capability. This year’s tweaks include a widened grille and faux skid plates that give the Kona a fresh appearance compared to last year’s model.

Wheel options run the gamut, from simple alloys on the SE up to intricate designs on the Limited.

The Kona has a clean, functional cabin with its touchscreen mounted up high on the dash and plenty of redundant buttons below. Its air vents and the trim around the touchscreen (regardless of size) enter 2022 with fresh styling, but otherwise the Kona is largely unchanged over last year’s model.

Front seats with good bolstering and a fair amount of adjustment – especially with the power-adjustable driver’s seat fitted to N-Line and higher versions – mean drivers should have no problem getting comfortable. The rear seat is a tight fit for three but offers decent leg room.

Cargo room grows to an impressive 46 cubic feet with the rear seat back folded down, and the load floor is pleasantly low for easy loading and unloading of whatever life throws at you. Most versions have roof rails that can accommodate attachments for bikes, skis, kayaks, and other gear.

How the Kona goes about its business depends on what’s underhood.

SE and SEL versions use a carryover 147-hp inline-4 with a new CVT that delivers middling acceleration but can keep up well enough with traffic around town. The turbo-4 in N-Line and Limited versions is far peppier, though its 7-speed dual-clutch automatic transmission can struggle at lower speeds as it figures out what gear is best for the situation.

Those models have soft, compliant suspension tuning and light but accurate steering.

They’re not necessarily fun to drive, but they handle competently and feel at home in basic commuting or highway stints. A Sport mode tightens up steering heft for a zippier feel, too. All-wheel-drive models swap in a higher-tech multi-link rear suspension that delivers a more planted feel on the road, too.

The Kona N, meanwhile, is in a class of its own. Yes, its big turbo-4 produces an impressive 276 hp, but perhaps most impressive is its slick handling. Its suspension – with adjustable dampers set to three modes varying from “firm” to “very, very firm” make it a tough call for daily driving over rough pavement, but it can be a thrill machine on a winding road.

With a fun personality to match its quirky styling, the Hyundai Kona is a standout among small crossover SUVs – especially with turbocharged power underhood.