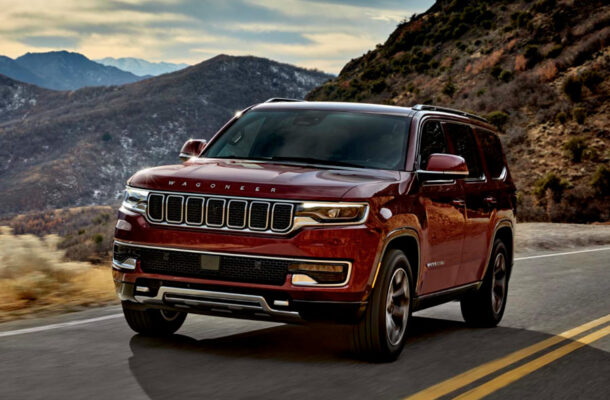 For 2022, Jeep has revived its full-size body-on-frame SUV in the form of the Wagoneer and Grand Wagoneer, which elevate the brand’s idea of American luxury.

The brawny new Jeep glides over the bumps, accelerates with impressive swiftness, and can tow thousands of pounds. It seats seven or eight in three rows, all of which have excellent space, and has vast cargo capacity.

Both Jeeps get the best suspensions, with multi-links in the rear and double wishbones in front. The Wagoneer has load-leveling rear dampers, and can tow up to 10,000 lb, while the Grand Wagoneer rides on adaptive dampers and air springs, with a 3.6-inch range in the setting of its height.

The Jeeps are rear-wheel drive, with an 8-speed automatic transmission. There are three available four-wheel-drive systems: Quadra Trac I, Quadra Trac II, or Quadra Drive II. Quadra Trac I splits the torque 40:60 front/rear and uses a mechanical limited-slip rear differential.

Quadra Drive II varies that torque split from 50:50 to 35:65 and uses an electronic differential. It also has a 2-speed transfer case with a 48:1 crawl ratio

The Series I, when it gets here, will be the cheapest model at $59,590, presumably equipped with far fewer luxuries.

For $74,690 Wagoneer Series III adds heated second-row seats, a four-wheel air suspension, and a head-up display. Its 4WD has a 2-speed transfer case.

The big Wagoneer is clearly a Jeep. Its trademark seven-slot grille is shorter, higher, and tilted forward over a big air intake and fog lights. Thin headlights wrap around toward the fenders with their trapezoidal arches. A chrome strip runs from mirror to mirror, around the back and across the tailgate. The rear glass is upright and squared off like the side mirrors.

It says Wagoneer on the grille and tailgate, but, curiously, nowhere does it say Jeep.

There’s as much technology in the cabin as there is luxury. There are three screens on the dashboard that’s shaped like a wing–including a 10.3-inch screen that’s available for the passenger–and another on the console in the Grand Wagoneer. There are three more screens available in the rear, for a total digital display of up to 75 inches–45 up front and 30 in the rear.

Leather is standard, and available in diamond-quilted Palermo hides. The top models have contrast piping, with contrast stitching elsewhere.

Jeep’s Uconnect 5 infotainment system is much faster and more functional than ever—and Uconnect has always been good. A rear passenger can plot navigation on their own screen and send the result to the driver’s 12.1-inch screen. The front passenger has their own infotainment screen that the driver can’t even see. Good thing, as the passenger can stream Amazon Fire TV.

Passenger and cargo space is awesome, with standard seating for eight in the Wagoneer and seven in the Grand Wagoneer with its captain’s chairs (available on the Wagoneer). Front seats have 12-way power, heating and cooling. The second row has tons of shoulder space. The third row has excellent space and support.

Even though the Wagoneer weighs more than three tons—about 6200 lb—it can get to 60 mph in 7.3 seconds, reasonably quickly. The standard 5.7-liter V-8 makes 391 hp and 404 lb-ft of torque, assisted by a 48-volt mild hybrid system that can add another 130 lb-ft of torque when it’s needed. We towed a 7,000-lb horse trailer, and the Wagoneer never broke into a sweat.

The 8-speed automatic transmission is smooth, programmed to shift at the best times to keep the engine in its power band.

Rear-wheel drive is standard, with three available four-wheel-drive systems with different capabilities, including a 2-speed transfer case with low range, and limited-slip differential, either mechanical or electronic. That 2-speed transfer case has a 48:1 crawl ratio, to pick your way through rocks at a walking pace, and there are three offroad electronic modes for traction: Mud/Sand, Rocks, and Snow.

The body-on-frame structure connects to a rear five-link independent suspension which has load-leveling dampers, while the Wagoneer Series III and all Grand Wagoneers get air springs that can raise the ground clearance to 10.0 inches for offroad, or lower it to 6.4 inches for better freeway aerodynamics. The air suspension and adaptive dampers control the big beast well, but it’s still cumbersome and sluggish on its feet. The steering is slow but direct, and keeps the big SUV straight and true.

The 2022 Jeep Wagoneer sets a new benchmark for the off-road brand, and backs up its ruggedness with power and luxury. The Wagoneer Series II or Series III should be enough for any driver that tows regularly, but Grand Wagoneer’s extraordinary interior almost justifies its extraordinary price.