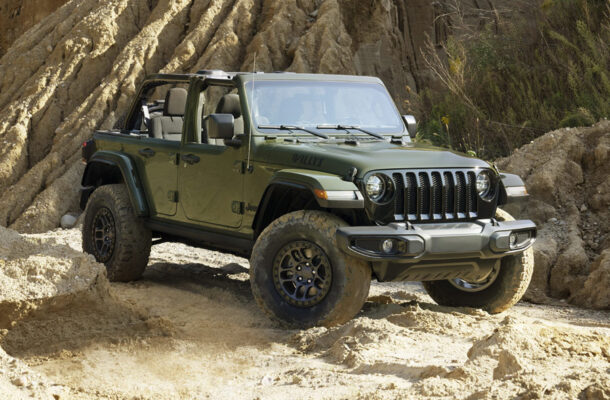 The 2022 Jeep Wrangler is at the top of its game when it comes to high-character four-wheeling. Dripping with personality, capability, and features, the Wrangler lineup is all about fun.

This year, Jeep makes a larger touchscreen standard on most models, while the ultra-capable Rubicon gains an even more impressive crawl ratio for extra-slow going.

The Wrangler range comes in myriad forms, all with four-wheel drive. Shoppers can pick between V-6, turbo-4, and borderline insane V-8 gas engines or a turbodiesel V-6. There’s even a plug-in hybrid that delivers 22 miles of electric-only commuting and decent fuel economy afterward. Only the base engine comes with a manual transmission, while an automatic is standard otherwise.

Fuel economy figures range from 19 mpg city, 24 highway, 21 combined for the most popular setup – the V-6 with the automatic and a four-door body – to 49 MPGe for the Wrangler 4xe. Other versions mostly check in below 20 mpg combined aside from turbodiesel that impresses us with its 25-mpg combined rating.

Crash-test ratings are still pending from the IIHS and the NHTSA. Jeep fits every Wrangler with four airbags, but not too much else. Automatic emergency braking, adaptive cruise control, and active lane control are all bundled together in an option package.

There’s a Wrangler for just about every off-road need, and most configurations are available in both two- and four-door (sometimes called Unlimited) versions.

Base Wrangler Sport models cost $31,320 and basically serve as a starting point for modifiers. You’ll pay extra for air conditioning and power windows – if you want them.

The Sport S runs about $3,000 more and adds air conditioning and alloy wheels, plus it’s the gateway to even more options including upsized infotainment, power features, remote start, and more.

From there, the lineup climbs through Willys and Altitude special editions before hitting the four-door-only Sahara that costs about $41,300. This version is the most comfort-oriented, with optional leather seats and standard 18-inch wheels, plus color-matched fender flares.

Off-roaders might want to step up to the Rubicon, which throws in a lifted suspension, all-terrain tires, and locking differentials, plus a special transfer case and sway bars that disconnect at the tap of a button for increased off-road articulation.

The Rubicon 392 tops the lineup at more than $76,000 to start with its massive V-8 engine. On all models, you’ll pay extra for a hard top or a package with both hard and soft tops.

No new vehicle has as clear and lengthy a lineage as the Jeep Wrangler, which was clearly inspired by the 1941 World War II-era original. Today’s model comes in two- and four-door guise, but both have the same upright stance, chunky fender flares, and purposeful, light-on-excess lines.

Each trim level has its own flair, but none deviates much. Sure, you can add color-matched fender flares and hardtop, a steel bumper, and various wheel designs, but nobody will ever ask you what you’re driving. They’re more likely to wave, after all.

The Wrangler’s cabin doesn’t win many awards for comfort, but it’s high on style and function. The upright dash houses an infotainment display as big as 8.4 inches, and various switches and knobs are generally well organized below.

Two-door models have iffy access to the second row, so those looking to use their Wrangler as a family hauler should look to the four-door model. With 38 inches of leg room, it’s decent enough, though climbing aboard any of these high-riders requires some dexterity. Head room is spectacular – especially with the top removed.

Wranglers can lug up to 32 cubic feet of stuff in four-door guise.

Most Wranglers use a solid 285-hp 3.6-liter V-6, which can be teamed to either a 6-speed manual or, more commonly, an 8-speed automatic. The engine works better with the automatic since it makes much of its power high in the rev range, but we won’t fault anyone who still wants to row it themselves.

The optional 2.0-liter turbo-4 delivers 270 hp, plus more torque at low rpm making it a better choice both around town and on the trail. The Wrangler EcoDiesel uses a 3.0-liter turbodiesel V-6 that pours on gobs of torque and impressive lugging power.

Rubicon 392 models are for drivers who simply must have everything. Polished, they are not, but they are wickedly fast. The unexpectedly good Wrangler 4xe is the polar opposite, a low-guilt commuter for weekend warriors.

Of course, every Wrangler is four-wheel drive. Jeep offers two basic setups, one with an automatic mode suitable for use on dry pavement. Optional limited-slip and locking differentials aid traction and are great choices for drivers looking to explore.

No Wrangler delivers truly sharp handling on road, but they steer reasonably well and ride quality is better than ever – especially in longer-wheelbase four-door versions.

There’s nothing quite like the Jeep Wrangler, a style and off-road icon reinvented for the 21st century. For open-top four-wheeling, it’s still a top choice.