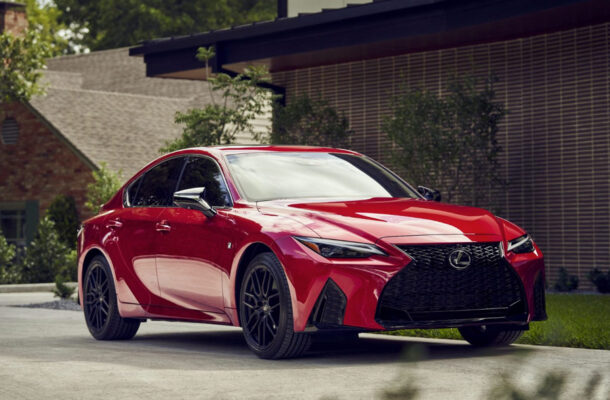 The Lexus IS is a luxury compact that does many things well, including keeping occupants safe. Milder versions handle well, but the new IS 500 takes things to new heights: it stuffs a 472-horsepower V-8 under the hood, in direct challenge to German and American rivals.

The IS a four-door, but if you want a two-door coupe, there is the similar Lexus RC. The IS was updated last year, including freshened styling, so it’s unchanged for 2022, other than the IS 500.

There is also the IS 350, which raises the V-6’s horsepower to 311, bringing excellent speed to the well-balanced chassis; the IS 350 also has F Sport styling.

A handling package with some luxury equipment and adaptive dampers is about $3,800. Other options include a 17-speaker Mark Levinson sound system and sunroof.

Even with the styling changes in 2021, the IS hasn’t changed much in 10 years. The wheels on the IS 300 might be boring, but the lines aren’t. It still has a lot of clever creases on the sides, the spindle grille, thin headlights with many little details, and a narrow band of taillights.

The F Sports, namely the IS 350, add nifty strakes and cutouts that generally look pretty good.

The dashboard is wide, low and appealing, with many switches and knobs that are easy to figure out. The cabin is well appointed, and its fit and finish exceeds many rivals, with good synthetic leather upholstery. The supportive front seats provide a broad view through the windshield.

The touchscreen was new last year, and its infotainment system was updated a few years ago. Lexus trails rivals with its software and input controller.

Rear-seat space is tight for large passengers, and the IS’ trunk is small too, at less that 11 cubic feet.

Even the IS 300 with the 2.0-liter turbo-4 has poise and power (241 hp). The usual rush of torque from a forced-induction engine gets subdued here, and ultimately we think the higher-output engines better suit the IS’ character.

Every IS delivers a good ride and handling. The IS 350 F Sport works best with the optional adaptive dampers, which give it flatter cornering responses while they also give it a more controlled ride.

Strap in tight for the IS 500. Its 5.0-liter V-8, making 472 horsepower and 395 pound-feet of torque, can blast from 0-60 mph in 4.4 seconds. Because it doesn’t weigh much more than the V-6, it corners so well that it’s fabulous on winding roads. It will understeer when pushed, but that’s to be expected. Because its torque is available early in the powerband, it charges at 3,000 rpm, with a lovely rumble coming from under the hood and out the tailpipes. It has bigger brakes to handle the speed.

The 2022 Lexus IS brings a wide range of powertrains to please sport-sedan enthusiasts. We’d start with the IS 350 and its V-6 grunt—but the V-8-powered IS 500 revs right for our heart.