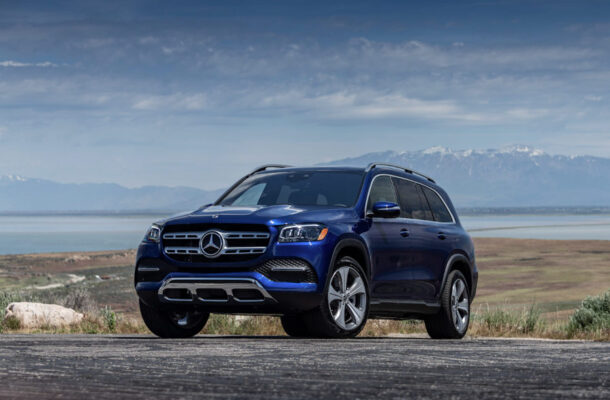 The 2022 Mercedes-Benz GLS is a full-size luxury seven-seat SUV, a flagship that rules the road with a powerful engine, a luxurious cabin, and a plush ride.

For 2022 it gains cooled front seats, 20-inch wheels, and four-zone climate control. However, due to chip shortages, the GLS has lost all its V-8 engines. Mercedes hoped to reinstate the models as supplies increased, but as of this writing it only sells one 6-cylinder model, the GLS 450.

The GLS offers effortless acceleration from any speed, even with its weight of about 5,400 pounds. Ride and handling match its power output, though on large wheels and tires the GLS can jostle its occupants.

No crash-test scores have been published, but the GLS comes with standard automatic emergency braking. An available package called Driver Assistance Package Plus adds adaptive cruise control, evasive steering assist, and a handful of additional active driving aids. For about $2,000, it’s a wise buy for the ultimate in SUV safety.

The GLS 450 doesn’t shout for attention. It’s an elegant mansion, with a well-balanced shape and a minimum of fuss. A big tri-star logo studs the GLS’ elegant twin-bar grille, under which a set of trim pieces suggest a set of rugged skid plates—they’re not functional in that way, but burnish the GLS’ SUV attitude. The relatively plain body sides resolve into an angled set of taillights.

Mercedes will fit the GLS with an AMG-styled body kit and 21-inch wheels; there’s even an option to light the logo in its grille.

The sublime cabin might have been transplanted from the S-Class sedan. Giant 12.3-inch screens under a single glass pane bring high technology without, necessarily, complexity. It’s lavish even before the options arrive. And even with its standard synthetic leather, which is (or can be) so good nowadays, that real mostly only matters in your head. Several colors are available, along with various wood, metal, and carbon fiber trims.

The power from the turbo-6 with its 362 horsepower is impressive. The GLS 450 shoots forward like a spaceship, and you can barely feel the 9-speed automatic upshifting. You can’t feel the all-wheel drive working at all, using its traction control modes.

The ride is mostly poised, even on the big 20-inch wheels, even on slippery terrain. The standard air suspension works hard to quell big bumps in Normal mode and to encourage a quicker pace in Sport mode. With the largest wheels, the GLS’ efforts to damp out bumps and soften its responses can generate some side-to-side motions that disturb the placid ride, so drive before you choose the flashiest rims.

The 2022 Mercedes-Benz GLS has slimmed down to a single model, but it’s still one of the best three-row luxury SUVs. Pick up the driver-assistance package with the GLS 450, for the most up-to-date technology.