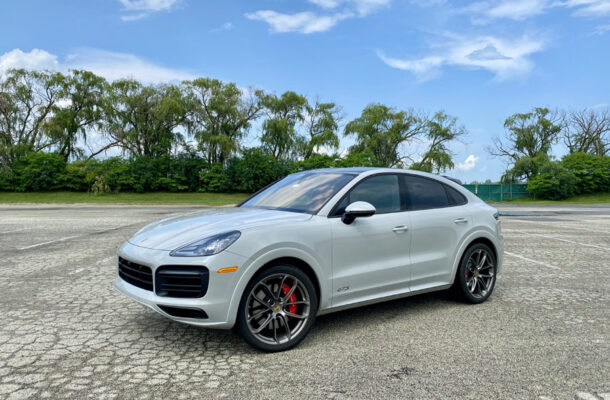 The 2022 Porsche Cayenne is a five-seat SUV that lives up to its maker’s reputation by providing breathtaking power paired with spectacular moves for such a luxe vehicle.

For 2022, Porsche’s SUV returns in both a more conventional SUV shape and with a sloping roofline as the style-oriented Cayenne Coupe. This year’s only major tweak is the addition of wired Android Auto compatibility, which joins wireless Apple CarPlay.

The Cayenne range starts with a strong turbocharged V-6 and works its way up through twin-turbo V-8s, plus a couple of plug-in hybrid versions. Power ranges from 335 to 670 hp, but there’s not a slouch in the bunch. All come standard with an 8-speed automatic transmission as well as permanent all-wheel drive.

Fuel economy is not a Cayenne priority. Base V-6 versions check in at 19 mpg city, 23 highway, 20 combined, and it generally goes downhill from there. E-Hybrid versions average between 19 and 21 mpg combined, plus around a dozen miles of emissions-free commuting or urban driving ability.

Though the latest Cayenne has not been crash tested by the NHTSA or the IIHS, it offers a wide range of crash-avoidance tech. Automatic emergency braking and parking sensors come standard. Optional equipment includes adaptive cruise control, a surround-view camera system, blind-spot monitors, and active lane control.

Porsche offers a staggering array of Cayenne iterations, starting with the V-6 at around $70,000. That money buys leather trim, power-adjustable front seats, a 12.3-inch touchscreen with wireless Apple CarPlay and wired Android Auto compatibility, navigation, and 19-inch wheels. Coupes run $8,000 more, which includes a sleeker body plus adaptive dampers, a panoramic sunroof, and the Sport Chrono package with its extra drive modes, launch control, and stopwatch.

At about $110,000, the Cayenne GTS offers razor-sharp reflexes and focus for drivers looking for added performance. It ups the ante with the twin-turbo V-8, a lowered air suspension, a torque-vectoring rear axle, a revamped sport exhaust system, and 21-inch wheels.

Options run the gamut and will take the average buyer more than an afternoon to properly sort through.

The latest Cayenne is offered either as the somewhat formally-styled standard model or with a sloping roofline as the Cayenne Coupe. Porsche-familial styling cues are evident throughout, even with the extra mass inevitable with a big SUV.

The front end features a wide grille with headlights mounted well above. Muscular flares and curves from the side hint at underhood power. At the rear, things wrap up nicely with clean lines and narrow taillights connected by an even thinner band with delicate Porsche lettering.

Each version has a slightly different take, most notable in the wide array of wheel options Porsche makes available. And then there’s the color choices – including the decadent “Paint to Sample” option that does exactly what it sounds like it should.

The Cayenne is a near dead-ringer for Porsche’s latest 911 inside, albeit with room for five and their gear.

The oversized 12.3-inch touchscreen that handles a huge mount of functions, absorbing many of the last model’s buttons and knobs for a much more tasteful look.

As with the exterior, the sheer number of trim options can overwhelm. Breaking out from typical blacks and tans reveals everything from rich burgundy to green, if you’re willing to pay for it.

Several seating options up front can cosset any driver. Rear-seat riders have good space for two or even three in a pinch. The 27.5-cubic-foot cargo area grows to 60.3 cubes with the rear seatback folded, though Cayenne Coupe models are a little tighter for both passengers and their cargo.

Fun in any form, the Cayenne can be a luxurious SUV with daily-driver softness or it can be a track-tuned machine that belies its prodigious heft.

Our favorite? The GTS, with its 480-hp twin-turbo V-8, its near-perfect suspension settings, and its reasonable (by Cayenne standards) price tag.

All Cayenne models have various drive modes that can tailor suspension, steering, and powertrain settings to different needs – from around-town comfort to curvy road-slaying smiles.

You can go further if you want, though. The Turbo GT and Turbo S E-Hybrid have different takes on high performance, but neither will shrug with indifference if taken to a race track.

Few vehicles offer anywhere near this level of performance flexibility and practicality. The Porsche Cayenne is the kind of SUV only one manufacturer could build this well.

–by Andrew Ganz, with driving impressions from The Car Connection