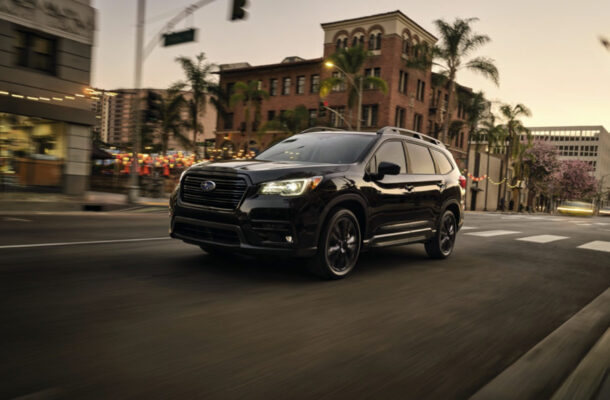 The 2022 Ascent is Subaru’s largest crossover SUV, with seating for up to eight people, standard all-wheel drive, and exceptional safety scores. The cabin’s wood trim in upper models dresses it up, but it’s still the hiking boot of its class. Durability is its vibe.

Power comes from a 260-hp turbo-4, whose moderate acceleration can be noisy. It rides very well on its 8.7 inches of ground clearance, a height that towers over rivals, enabling the Ascent to clamber better. It has as much room as rivals; three adults fit in the second row and three children fit in the third row.

With five stars overall from the NHTSA, and a Top Safety Pick+ award from the IIHS, the Ascent misses running the tables only because of its four-star score in rollover resistance, thanks to its height.

Made in Indiana, the Ascent is sold in base, Premium, Onyx, Limited, and Touring trim.

Base $33,420 Ascent SUVs come with cloth upholstery, a 6.5-inch screen with Apple CarPlay and Android Auto, and 18-inch wheels.

The Ascent has a tall face with simple headlights and a grille borrowed from the Outback. On the sides there are tall windows over a low beltline. The ascetic rear end carries Forester-like taillights to mix things up a bit.

The cabin of the Ascent isn’t particularly plush or quiet, but it is practical and durable. It abounds in bottle and cupholders (we counted 19 of them), storage bins and USB charge ports. The instrument panel, with its big vents and controls, is canted toward the driver. The base touchscreen is just 6.5 inches, making smartphone interfaces more difficult to use, so we’d jump to the Premium with its 8.0-inch screen right off the bat.

The synthetic or real leather with woodgrain trim in the top two models go a long way toward dressing the Ascent up.

The first two rows are very comfortable. The front seats have good adjustment. The base seat is manual; the Premium adds a power driver seat and the other models add power for the passenger.

Second-row passengers have either a bench seat with about 39 inches of leg room and lots of head room, or a pair of captain’s chairs. The row fits three adults.

Row three is big enough for small or maybe medium-sized passengers, and has 31.7 inches of leg room. A couple of rivals have bigger third rows.

The outward vision would be better if the rear roof pillars were thinner.

Every Ascent is powered by a 2.4-liter turbo flat-4 that makes 260 hp and powers all four wheels via a CVT. It works hard to keep the Ascent plugging away at highway speeds. It’s not the quietest powertrain under full throttle but it’s still sufficiently powerful to move the two-ton crossover with reasonable authority, and in city driving it settles into a comfortable lope.

The Ascent’s talented all-wheel-drive system scrambles easily up dirt roads and trails, and can handle tougher terrain as well. Its 8.7 inches of ground clearance isn’t enough to crawl over boulders, but it will clear most rocks on the trail.

The Ascent has feather-light steering and a tight 38-foot turning radius, so it’s maneuverable and easy to park. But it feels best out on the highway, where it shows off its calm, absorbent and superior ride.

The 2022 Subaru Ascent rises above rivals with superior safety. The cabin is roomy, practical, and rugged, and the ride is terrific. Make ours a Touring.