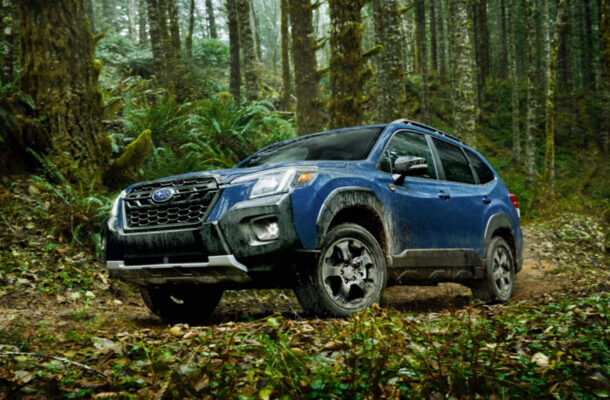 The 2022 Subaru Forester is a spacious and safe five-seat wagon with standard all-wheel drive, useful beyond compare. Twice, it has been named Best Car To Buy by The Car Connection.

For 2022 it gets a new face with a bigger grille, and a new model called the Wilderness. Some versions get automatic emergency steering.

The powertrain is a 182-hp flat-4 with a CVT, which together don’t produce much off-the-line speed; it accelerates adequately, with a fair amount of noise. The ride and resilient behavior on and off road are the Forester’s virtues. It corners with ease and ambles over rocky or muddy paths with X-Mode traction controls and up to 9.2 inches of ground clearance. With the rear seats folded there’s more than 75 cubic feet to carry mountain bikes, kayaks, or furniture.

The Forester earns EPA ratings of 26 mpg city, 33 highway, 29 combined, with the exception of the new Wilderness, which, apparently because of its higher ground clearance, drops to 25/28/26 mpg.

The IIHS gives the Forester a Top Safety Pick+ award, in part due to its adaptive LED headlights. The NHTSA gives it five stars overall, with four stars for rollover resistance.

Made in Indiana, the Forester comes as base, Premium, Sport, Sport, Wilderness, Limited, and Touring.

Every Forester comes with 3-year/36,000-mile warranty.

For 2022 the Forester gets a fresh grille and a more pronounced front end. It’s blocky but doesn’t come off as an attempt to look off-roady. The Wilderness does look that part, with its high ground clearance.

The Forester’s rugged details can’t hide the profile of function, but some styling features add grace, for example the slim roof pillars. The taillights bracket a black trim strip.

There’s no drama in the Forester cabin. The layout is pragmatic and the materials durable, with rugged cloth in the lower models. There are sport and luxury trims with leather or black-and-orange synthetic skins, but that doesn’t change its hiking-boots character—the leather is tough, rather than soft. The Forester’s wash-and-wear cabin is down with the dirt.

The front seats are thickly bolstered without being confining, thanks to a wide range of adjustment. The driving position is swell. The wide and tall doors abet easy access.

The rear seat boasts a giant 40 inches of leg room, and is wide enough for three people for short trips. It folds down to turn 35.4 cubic feet of cargo space into 76.1 cubic feet. The Forester has a cargo hold the size of some walk-in closets.

With a lot of glass, the outward vision is exceptional.

As with nearly every Subaru made (save for the BRZ sports car), the Forester is all-wheel drive. Its focus is traction, not speed. Its 2.5-liter flat-4 engine makes an unexciting 182 horsepower, and works well enough with its CVT, as Subaru’s CVT is very agreeable. The powertrain is willing to work hard, if noisily.

The Forester is relatively light for a crossover, at 3,500 lb, which allows it to accelerate from a standing start to 60 mph in about eight seconds.

Traction aside, the Forester’s ride is its best quality, but the handling is almost as good—although that gets right back to traction. It’s steady and predictable in every situation, thanks largely to the sophisticated electronic programming of its all-wheel-drive system that moves power around between all four wheels in the corners, depending on which wheel needs the traction.

It’s attentive and confident on every surface, maybe especially offroad. With 8.7 inches of ground clearance on all but the Wilderness model (it rises to 9.2 inches), decent all-season tires, and an off-road mode on most models, it excels. It gets better with drive modes that change throttle, shift, and hill-descent dynamics.

On the pavement, the ride is calm and collected. The Forester never gets irritable or confused, maintaining an even keel as it gently leans into bends and absorbs bad bumps with its independent suspension.

If you want the best all-wheel-drive system out there in a five-seat crossover, the 2022 Subaru Forester must be considered. If you never go offroad, you won’t get its best feature, but the system will still improve stability in rain or snow. The cargo hold is vast. Acceleration is adequate, and the CVT is one of the best.