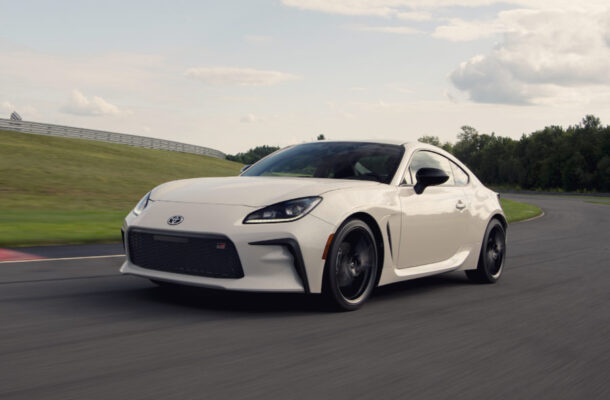 The Toyota GR86 2+2 sports coupe begins its second generation in 2022, after its fraternal twin the Subaru BRZ led the way with a redesign late last year. The 2022 GR86 gets a bigger and more powerful engine with less weight, which is almost good enough to stop there. But there’s also a new chassis with a longer wheelbase, more overall length, a stiffer suspension, and functional air intakes. In the cabin there’s a larger infotainment screen.

Toyota adds to this rear-wheel-drive sports car a Gazoo Racing (GR) badge, to honor its lineage and mark it as track ready. It’s an effortless car to drive on the track, but even better on the street.

The body is longer and leaner, but the changes are subtle and not easy to see. At 167.9 inches, the 86 is 1.2 inches longer, while the wheelbase grows by only 0.2 inch. It’s also 1.0 inches higher. The hood is still long and the deck still short, and ground clearance still low.

The bigger engine is 2.4 liters, replacing a 2.0-liter mill; it’s a bit heavier, but that’s offset by aluminum roof panels and front fenders, as well as redesigned lighter seats. It now makes 228 horsepower and 184 lb-ft of torque, up from 205 hp and 156 lb-ft, a very generous increase that should satisfy a common complaint about the 86, from power mongers. But even better, the new engine has a totally different character, with its peak torque coming way down at 3,700 rpm, instead of way up at 6,700 rpm, which makes it fantastically easier to drive.

The 0-60 mph times drop almost a full second, to 6.1 seconds with the 6-speed manual transmission and 6.6 seconds with the 6-speed automatic. New adaptive controls for the automatic choose the right gear for the situation, based on the driver’s style. But the automatic is the only viable transmission for the street, because the manual doesn’t come with automatic emergency braking. That makes the quicker 6-speed manual a great track-day car.

The EPA estimated mileage is 20 mpg city, 30 highway, 24 combined with the automatic. The combined mileage is 3 mpg less with the manual transmission.
The NHTSA and the IIHS haven’t crash-tested the 86 yet.

In addition to a 3-year/36,000-mile warranty, Toyota includes 2 years/25,000 miles of scheduled maintenance and roadside assistance. All 2022 Toyota GR86 buyers will get a one-year membership to the National Auto Sport Association and instruction at a high-performance driving event.

The lines are clean but far from adventuresome. It’s distinct from the Subaru BRZ, with a wide, low mesh grille and vertical air intakes to cool the 11.6-inch front brakes; as a side benefit, the vents improve stability at high speed, by smoothing the air flow over the front wheels.

The 86 is called a 2+2, fairly enough, but realistically it’s a two-seater with storage behind the seats.

The cabin is understated. The dash is plain, boasting a big touchscreen in the center and a digital gauge cluster. The climate controls are round knobs, while the warm and cool air comes out round vents. The drive modes and traction setting are toggles. There’s a lot of hard plastic, but it doesn’t feel cheap.

The front seats are manual, covered in grippy cloth or a blend of leather and Alcantara. The steering column tilts but doesn’t telescope, which might present a problem in finding the perfect seating position for a sports car; with the manual seats, it’s definitely old school. Head and leg room is good, yet a tall driver wearing a helmet might rub the roof.

The rear seats are okay to take kids for a ride, and perfect for briefcases and packages. But the bonus is that the rear seatbacks fold to allow access to the 6.3-cubic-foot trunk; Toyota says four wheels and tires can fit back there, for track days.

The new and bigger 2.4-liter engine makes 228 hp and 184 lb-ft of torque. Peak torque arrives at 3,700 rpm, compared to a very high 6,700 rpm in the previous generation’s 205-hp 2.0-liter engine. The unrefined engine sounds raucous at full throttle, but at cruising speeds isn’t coarse. The 86 growls its way to 60 mph in 6.1 seconds with the manual shifter, or 6.6 seconds with the automatic.

We like the shift action of the 6-speed gearbox, but it’s a hard sell because it can’t come with automatic emergency braking. The 6-speed automatic does a fair job. It tries to keep some of the fun of a manual by using a shift gate, in addition to paddle shifters.

The 86 is known for its fabulous handling, precise and loose and easy to control in a slide, which makes a driver feel like Mario Andretti on the track. Track days are way fun in this car.

With vented disc brakes at all four wheels, a strut and multi-link rear suspension, and even just the standard 17-wheels, the 86 has true sports-car poise—and with the 18-inch wheels it’s even more confident. At just 2,811 pounds, it slips through esses with composure, and with newfound horsepower screams down straightaways. Flick it into a tight corner and it slides into catchable oversteer, without a hint of temper or unpredictability. It is so well balanced, it’s perfect for novice track-day drivers. Its communicative steering inspires confidence. It’s crisp, unflappable, and supremely intuitive.

The new Toyota 86 offers some very rare and special things for $30,000. What more could you ask for? The 86 has found its engine, quicker and way more responsive; the styling may not be striking but it’s hard not to like; and the sports-car handling and balance is exceptional.