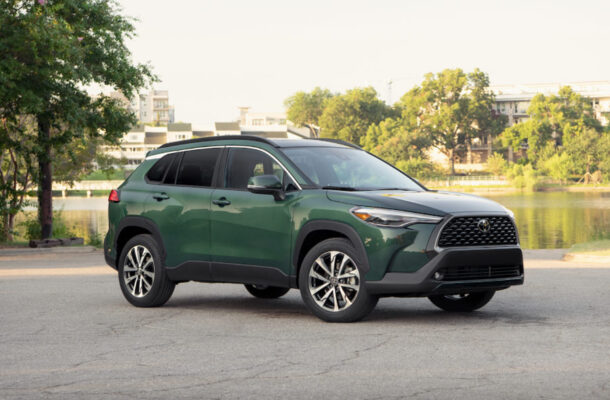 The 2022 Corolla Cross joins the Toyota family this year as its smallest crossover with all-wheel drive. Taller than the Corolla sedan, it looks like a scaled-down and squatter version of the RAV4, whose architecture and interior design it shares. It’s 5.9 inches shorter than the RAV4, all of it lost in rear-seat leg room. But its wheelbase is only 2.0 inches less, at 103.9 inches, so it rides well.

That’s not much better than the RAV4. However there’s a hybrid Corolla Cross in the pipeline, probably coming for the 2023 model year.

The Corolla Cross has not yet been crash-tested by the IIHS or the NHTSA. But it has a wealth of standard safety equipment, including automatic emergency braking, adaptive cruise control, active lane control, and automatic high beams. Mid-range LE models add blind-spot monitors and top XLEs get parking sensors and rear cross-traffic braking.

The Corolla Cross mimics the RAV4, especially in its wheel wells and smartly angled roof pillars, and the shape translates well to shorter dimensions. Features that set it apart include an upturned “mailbox” grille, more pronounced and curved fenders, and slimmer LED lighting.

These details make it less rakish than the RAV4 but no less stylish.

The interior design is simple and friendly. It has a familiar layout with the touchscreen perched on the dash. With tilt/telescope steering it’s easy to find a good driving position. But the manual cloth front seats in the L and LE need more padding and lumbar support. The XLE fixes the issue with synthetic leather and power adjustment.

The back seat can fit two large passengers, and there’s plenty of head room. But a mere 32.0 inches of leg room and 52.5 inches of shoulder room don’t leave much space for longer legs or a third passenger.

With a 2.0-liter inline-4 bringing 169 hp and 150 lb-ft of torque, the Corolla Cross moves with moderation in mind. The CVT works with available torque to keep acceleration smooth, but there’s just not much power on tap.

The electric power steering doesn’t have a lot of feedback and it’s very light at parking-lot speeds, but on interstates it builds enough weight to keep the car centered. In tight corners, if taken with a head of steam, understeer is prevalent.

The Corolla Cross can tow up to 1,500 lb, technically, and its ground clearance of up to 8.2 inches is a half-inch less than a RAV4. All-wheel drive will provide more secure traction in mud and snow, but the Corolla Cross isn’t meant for off road.

The 2022 Toyota Corolla Cross offers economy-car shoppers the fuel economy they want, in a crossover-SUV body. It’s capable and efficient, and well equipped in base models. We’re eager to try the coming hybrid model, due in 2023.