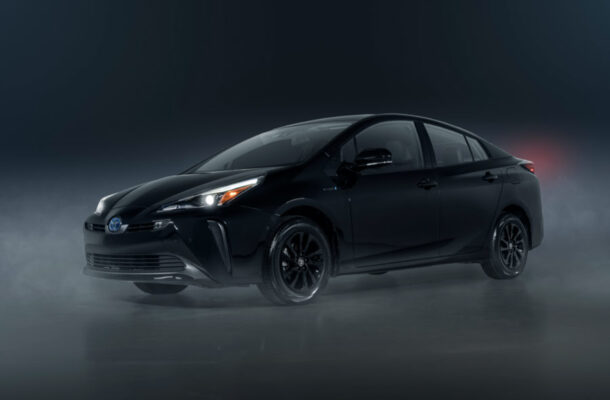 The 2022 Toyota Prius hybrid doesn’t have the lead over the world that it once did. Some rivals now make cars that get competitive fuel economy, not to mention all-electric vehicles that weren’t around when the Prius hit the market two decades ago. Toyota itself builds other hybrids that offer the same benefits as the Prius.

Still, the 2022 Prius performs better than ever. It has a roomy cabin and excellent safety features. For 2022 it gets a Nightshade Edition with black wheels, door handles, and badges, plus black trim accents inside and out. It also adds a heated steering wheel and heated black synthetic leather seats.

The 2022 Prius comes in front-wheel-drive or AWD-e form, or as a front-wheel-drive Prius Prime plug-in hybrid. Its inline 4-cylinder engine displaces 1.8 liters and makes a combined 121 horsepower, using dual electric motors packaged as part of a planetary torque-split transmission. It has perky enough acceleration but it can’t be called quick. However it gets 56 mpg combined, which makes perky sound fantastic.

The Prius can seat five, but the sloping roofline cuts head room in back, where it’s not wide enough anyhow for three adults to ride in comfort. The rear seats fold to create as much cargo space as some crossovers, another huge plus.

The Prius Prime adds an 8.8-kwh battery pack that can be charged in less than 2.5 hours with a 240V (Level 2) home wallbox or mobile connector. It earns 133 MPGe and offers 25 miles of all-electric range, or without a charge it’s rated at 54 mpg combined.

The NHTSA gives it five stars in safety, but their tests and ratings don’t take into consideration the poor rearward vision through the narrow angular windows and sloping roofline.

In 2021 the IIHS gave it “Good” scores on five of its six crash tests, and an “Acceptable” on the small front overlap test.

All-wheel drive costs only slightly more, just $1,000 on the XLE.

The Prius Nightshade Edition, new for 2022, builds off the XLE trim and comes with black 17-inch wheels, headlights, pillars, and mirrors.

The 2022 Prius features triangular shapes, with creases and smooth surfaces that are too busy for our tastes, although buyers like the aerodynamic result of high fuel economy. The hood and headlights make the Prius look especially wedgelike.

Along the sides, the styling gets muddled with lots of creases and contours. The sharp edges and beltline move to an eccentric rear end that’s a bit more interesting, as they converge into a split-glass hatchback.

The interior design is striking, somewhat strangely futuristic. A low dash sets the gauges far ahead. The 7.0-inch horizontal touchscreen is embedded beneath the vents at the top of the center stack; in the Prius Prime and Prius Limited, a vertical 11.6-inch touchscreen flanked by vents commands the cockpit and looks more cohesive.

Most models get manual front seats that are far from plush but they’re not as thick as they might be. The eight-way power seats on upper versions add prestige but not much more comfort.

Five people can fit in the Prius, but rear head room and leg room are tight; if the three rear passengers are full-size adults, it doesn’t work.

But the folding seatbacks and low cargo floor behind them allow for a ton of cargo space—50.7 cubic feet. The seatbacks are split on all but the base L Eco. Even with the rear seats in use, there’s 27.4 cubic feet. That’s better than mid-size sedans, and as much as many small crossovers.

The Prius’ evolved hybrid system has made it the fuel-economy champ for much of the last two decades. It makes a combined 121 horsepower, using a 95-hp 1.8-liter inline-4 internal combustion engine and a 53-kw electric motor powered by a 0.75-kwh lithium-ion battery pack. The AWD-e model adds another motor at the rear wheels, plus a larger 1.2-kwh nickel-metal hydride battery pack that better withstands cold weather. Although the rear motor system is small, it helps get grip for a smooth start on slick surfaces—and improves acceleration on dry roads.

The Prius is more exciting to drive than it used to be, but this green icon is still a turtle. The quicker AWD-e can accelerate from 0-60 mph in about 10.5 seconds, while the base L Eco takes 12 seconds. To the seat of the pants, that’s a big difference. The front-wheel-drive plug-in hybrid Prius Prime isn’t any quicker than AWD-e versions.

The Prius is reasonably responsive on city streets, when its electric motor system can pitch in its torque where it matters. There’s a ‘B’ setting for more regenerative braking that is useful and productive going downhill.

The 2022 Toyota Prius delivers all the right numbers for low-cost commuting. Its cargo capacity is excellent, its technology is next level—it’s still the hybrid that sets the pace for green driving.