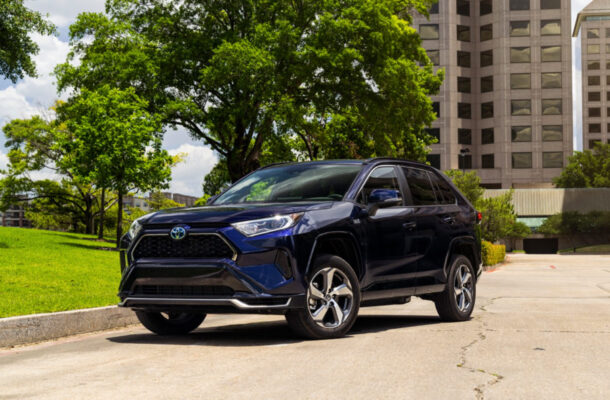 The Toyota RAV4 is a compact crossover SUV with great styling and equipment, while offering a gem of a plug-in hybrid called the Prime. For 2022 the interior and styling have been tweaked, namely with upholstery and headlight changes.

The base engine is a 203-hp inline-4, which does the job although it’s raucous when pressed hard. But it shifts smoothly, and the handling of the RAV4 isn’t boring.

Things get interesting with the 219-hp Hybrid, with its battery pack and electric motor; it sacrifices almost nothing to the driving experience. And things grow to be downright compelling with the 302-hp Prime, which uses a big battery pack to accelerate to 60 mph in less than six seconds, while still providing an all-electric range of 42 miles.

The NHTSA gives the RAV4 five stars overall for safety, with four stars in the front-impact crash tests. The IIHS gives the RAV4 a Top Safety Pick award, but only for the Hybrid Limited and its special adaptive headlights. Most other models have LED headlights rated “Marginal” or even “Poor.” For 2022 the XLE and above get new headlights, which haven’t been rated yet.

The RAV4 is made in Kentucky, except for the Prime, which is made in Japan. There are at least 16 different configurations, from the front-wheel-drive LE to the Prime XSE plug-in hybrid. Prices haven’t been published yet for 2021 but the LE should go for about $28,000, equipped with cloth upholstery, a 7.0-inch touchscreen with Apple CarPlay and Android Auto., 7-inch wheels, and a split-folding rear seat.

The RAV4 XLE comes with gas or hybrid drivetrains; the gas version is about $30,000 with all-wheel drive. It adds keyless start, a power driver seat, and access to more options such as a larger touchscreen and heated front seats. For 2022 it gets better headlights. Or choose the XLE Hybrid for about $31,000.

The RAV4 Prime is hard to find, and will probably be marked up over its MSRP of just below $40,000. It gets synthetic leather upholstery with red accents, a sport suspension, audio subwoofer, sunroof, and available 9.0-inch touchscreen.

The stylish RAV4 takes lots of angular chances, and they all work. It has an adventurous chunky body that’s ruggedly smooth, with squared-off wheel wells and a squat stance. The windows are slim and there are hints of 4Runner and Tacoma in its profile.

Some versions have a mesh grille and at least one has black fender trim and a black roof. The Prime gets its grille and gloss-black bumper, for a touch of visual distinction.

The cabin has an exciting sense of style that somehow comes through the simplicity of its design. It’s thoughtful and restrained, without being dull. The spare lines and basic controls are laid out around the touchscreen, with a horizontal line across the dash that gives it calmness brightened by metallic trim around the vents and the shift lever.

There are plenty of shelves and small bins for phones and water bottles. The interior could improve upon some of its harder plastics, but spendy versions wear synthetic leather with contrast-color stitching, as well as a big 9.0-inch touchscreen.

In front, the seat padding feels thin, and some head room is lost to the sleek roofline, although the driving position is nice.

In back, some shoulder space seems lost, and the middle passenger won’t like that, but there’s a decent 37 inches of leg room. There’s a lot of cargo space behind the seat, 37 cubic feet, which expands to 69 cubic feet when the seat is folded. The Prime loses about six cubic feet to its battery pack. The cargo floor sits at a good height for loading, and many models have or offer a power tailgate.

The base RAV4 has average acceleration and road manners. It putters around using its 203-hp 2.5-liter inline-4 teamed to an 8-speed automatic that sends power to the front or to all four wheels. It’s competent, if rough when pressed hard.

The all-wheel-drive system shifts power to the rear wheels when the fronts lose grip, as they all do. But the 16 versions include models called the Adventure, TRD Off-Road, and Limited, which also split power between the rear wheels for better-yet traction. Even on dry pavement, this system improves the grip and sharpness in cornering.

All RAV4s use a strut front and multi-link rear suspension that does a good job over frost heaves and sharp road edges. The RAV4 steering has a more engaging feel than rivals.

In the 219-hp AWD RAV4 Hybrid, the rear-mounted electric motor engages when the front wheels slip, giving the car something that Toyota calls “through-the-road” all-wheel drive. It’s still a system primed for all-weather traction, not hardcore adventuring. The Hybrid’s appeal lies in very efficient power delivery with sky-high gas mileage, and a very slight penalty in weight and ride quality.

But if it’s power you want, on top of gas mileage, then it’s the Prime for you—if you can find one. It gets a big 18.1-kwh battery pack with electric motors to generate 302 hp. After the Supra sports car, it’s the quickest Toyota made, with a 0-60 mph time of 5.7 seconds. It also has a taut sport suspension, confident handling, and that 42 miles of all-electric range. The battery pack adds about 500 pounds to its curb weight, and that shows up in more understeer in tightly kinked roads, but it’s still an easy drive.

Every 2022 Toyota RAV4 is praiseworthy, and there are so many to choose from, from base crossover to TRD Off-Road to the high-mileage Hybrid to the one that steals the show, the 302-hp Prime. If you can’t find one, an XLE Hybrid delivers all the basic goodness, plus very good fuel economy.