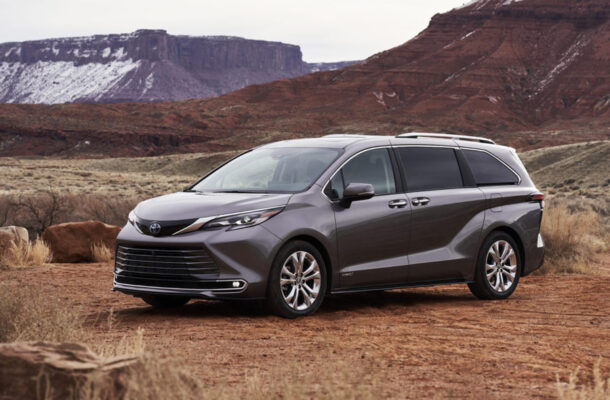 The Toyota Sienna is a stylish, spacious, and safe minivan that’s configured as a gas-electric hybrid, with a plush ride and all-wheel drive available on each of the six models.

The Sienna comes with seven- or eight-passenger seating. The body is sharply styled, and the instrument panel is car-like. The refined hybrid powerplant combines a 189-horsepower, 2.5-liter inline-4 engine with an electric motor for a total output of 245 hp, driving the wheels through a CVT.

The EPA rates the front-wheel-drive Sienna at a consistent 36 mpg whether in the city or on the highway, and 1 less mpg with AWD.

The NHTSA gives the 2022 Sienna five stars overall, with four stars for frontal impact. The IIHS calls it a Top Safety Pick+.

At about $36,000, the Sienna LE has cloth seats, power sliding doors, and a 9.0-inch touchscreen with Apple CarPlay and Android Auto.

For about $41,000, the XLE adds synthetic leather upholstery and a sunroof, while a power liftgate is optional.

The $48,000 Limited comes with real leather, heated and cooled front seats, navigation, a JBL sound system, and an intercom that sends the driver’s voice to the third row.
The Platinum can reach $55,000.

The Sienna’s sculpted lines and balanced details give it an attractive look, one that can be shifted into more luxurious or more adventurous themes. The XSE is intended to look more sporty, so it has a different bumper and bigger wheels. The Woodland trim has a raised suspension over tires that are the same size as the other models, and a distinct gray paint color.

The Sienna cabin is flexible, in that it can seat seven or eight. The design is pleasing and there are many places to put small items. The center console is ordinary and functional, and the wood trim looks convincing enough. Toyota has done a good job of making durable and easy-to-clean materials look good.

The front seats are comfortable for long hours, with standard heating and synthetic or real leather on all but the base LE. Thanks to a low dash, forward vision is good.

The rear feels less roomy than it might, because of wide roof pillars and small rear windows. Cubbies for small things, and even cupholders, are fewer than could be. The step-in height is nice and low, and the sliding doors can open with the swipe of a foot from the outside.

Row three has relatively good leg room, but the bench is flat so not very comfortable. And the small rear windows are claustrophobic. The third-row seat folds into the cargo floor, although the mechanism is manual. With the second row also folded, there’s enough cargo length and width for a sheet of plywood.

The hybrid system doesn’t deliver great acceleration from its combined 245 horsepower, but it’s quick enough to keep good pace in urban driving. It doesn’t struggle to keep up with traffic. The CVT works with the engine to produce efficient power, and good sound deadening keeps the cabin quiet.

If rivals are peppier, they can’t match the sophistication of the Sienna’s ride. The steering has a nice weight, and in corners the body lean is slight. The handling is as good as any competitive SUV. The brakes are strong, and their modulation is easier than with other Toyota hybrids.

All-wheel drive is optional on every model, another thing that sets the Sienna apart from rivals. The system uses a second electric motor mounted on the rear axle, and with such systems there’s no mechanical connection to the front wheels. It’s designed for better traction on slippery surfaces, not off road.

If you need an all-wheel-drive minivan, look no further than the 2022 Sienna. It’s one of the top-scoring minivans for safety and fuel economy, and its styling and handling aren’t far behind.