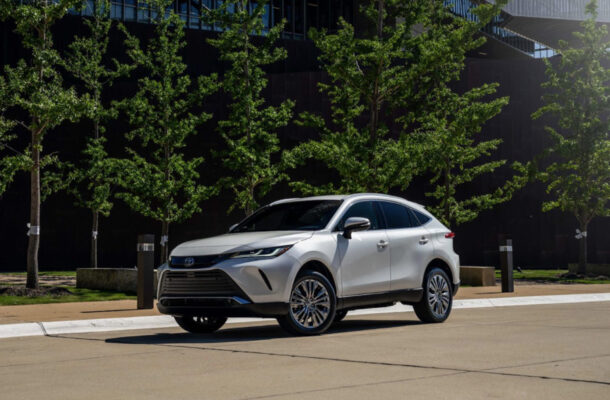 The Toyota Venza is a compact hybrid crossover with standard all-wheel drive. It’s unchanged for 2022.

The Venza is reasonably quick, with a 0-60 mph time of about seven seconds behind a wall of sound insulation. The 2.5-liter 4-cylinder engine powers the front wheels, while one of the three electric motors powers the rear wheels. The steering lacks some precision and the body leans a bit in corners, but the ride is composed and smooth.

The NHTSA gives it five stars in safety, with four stars in frontal crash protection. The IIHS calls it a Top Safety Pick, with “Good” scores in all its tests.

Made in Japan, the Venza comes in three models: LE, XLE and Limited.

For $37,415 the XLE gets synthetic leather upholstery and heated front seats; options include a head-up display and a twin-pane sunroof.

The shape is sculpted, urbane and suave–like a Lexus, but without the polarizing spindle grille. It may share some running gear with the RAV4, but it casts none of its hard shadows. The Venza has no rigid lines, just gentle edges and flowing curves, a soft wedge with a coupe-like back half.

The LE gets cloth seats, but most Venzas on dealers’ lots are the XLE with synthetic leather. It covers not only the seats, but the doors and dash and center console too, while the shifter and steering wheel are real leather. With the contrasting stitching and seat piping, it looks classy.

If the body lacks angles and edges, the high-tech instrument panel makes up for that. The standard touchscreen is 8.0 inches, but the Limited’s 12.3-inch screen better suits the car. The navigation system is programmed to deliver the best gas mileage on a trip, by avoiding hills and stoplights.

The front seats offer good support, with standard power adjustment for the driver, heated in XLE and Limited. The bottom cushion doesn’t tilt, however.

There’s good leg room in the rear, 37.8 inches, but head room is a bit low on account of the sleek roofline. And three passengers will need to compromise to share the back seat.

There’s 28.8 cubic feet of space behind the rear seat, accessible through the standard power tailgate. Thanks to the coupe-like roofline, that’s 10 cubic feet less than the more upright and conventional RAV4, which shares the Venza’s platform.

The 2.5-liter inline-4 engine, combined with the three electric motors, makes a total of 219 horsepower. It can accelerate to 60 mph in about seven seconds, which is quick enough for most buyers of a car like this, who are more likely to be thinking about that near-40 mpg, anyhow.

The transmission uses electric motors to generate the equivalent of transmission gears; that is, it’s gearless. It’s a super smooth blending of internal combustion and electric power, although there is a slushy feel to the acceleration because the transmission moves around the engine’s powerband chasing maximum gas mileage.

That same chase of gas mileage results in an electronic feel to the braking. With every application of the brakes, first it’s regenerative, then conventional, and the transition isn’t as seamless as the gas-to-electric of the motor.

The ride has the quality of a Lexus, even on its RAV4 underpinnings. Credit there goes to its softer springs and shocks, which make a big difference. The handling is a bit less sharp, and that takes some of the excitement away, but it’s very pleasant and always capable.

The 2022 Toyota Venza drapes an appealing shape over a powertrain with very appealing fuel economy. The Venza XLE offers very good value with those features plus its plusher interior.