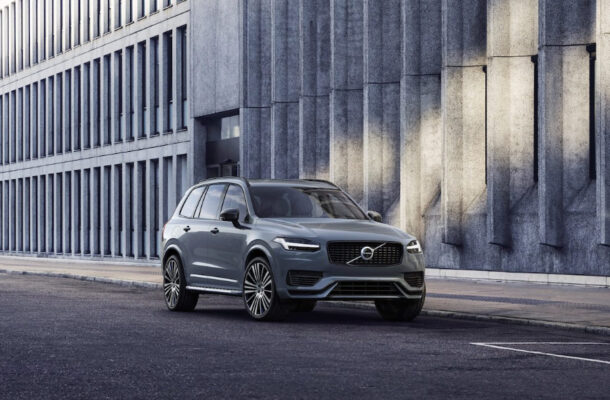 The Volvo XC90 is a luxurious three-row crossover SUV. Available in a choice between six- and seven-seat versions, it’s also supplied with plenty of turbocharged power and a divine interior.

For 2022, Volvo has updated exterior styling at the rear to hide this SUV’s tailpipe, and a built-in navigation system is now standard fare.

Volvo sells its flagship SUV in T5, T6, and Recharge variants. All-wheel drive is optional on the T5 and standard elsewhere. T5 versions put 250 horsepower to the wheels, while T6s load up 316 hp thanks to the addition of a supercharger. With 400 horsepower, an 18-mile electric-only range, and a 5.3-second 0-60 mph sprint, the Recharge is both the eco-friendly and enthusiast-friendly version.

Fuel economy ranges from 21 mpg city, 30 highway, 25 combined for base front-wheel-drive models to 19/27/22 mpg for the popular T6 with standard all-wheel drive. The Recharge is rated at 27 mpg combined after its battery is depleted, but its 18-mile range and 55 MPGe on a full charge offset that figure.

At $51,995 to start, the base XC90 T5 Momentum wants for little. Its seven-passenger seating is draped in synthetic leather, and amenities include 19-inch alloy wheels, a power tailgate, parking sensors, a wireless device charging pad, Apple CarPlay and Android Auto, and a 9.0-inch touchscreen.

Inscription and R-Design models don’t differ in terms of power, but each has its own personality. The Inscription versions offer either softer leather around seats with more adjustment or a unique woolen upholstery, plus real wood trim. R-Design versions have a sporty look with black trim and bigger wheels.

The XC90 was the first Volvo to adopt the brand’s current styling theme, and it has aged gracefully. Its lines are tasteful, purposeful, and imposing, without being brash or over the top. It’s the kind of SUV that, as time has shown us, can still look great even after being on the road for a while.

R-Design versions have blacked-out exterior trim, while Inscriptions come dressed with some brightwork. Neither changes the XC90’s look overall.

Wheel sizes and designs include base 19-inch alloy wheels all the way up to big 21-inchers.

The XC90 is arguably at its best inside. Its cabin is neat and composed, with little in the way of frippery. A clean, simple dash houses a 9.0-inch touchscreen mounted vertically. Few buttons and knobs distract, and yet somehow the XC90 manages to be brilliantly intuitive.

Of special note are the available trims. From synthetic leather to two different grades of hides all the way to a woolen upholstery, the XC90 manages to feel custom-tailored at every step of the way.

With its base 250-hp engine, the XC90 offers good acceleration, though the available T6 model’s 66 extra hp and commensurate increase in torque deliver stronger power in any situation.

Recharge versions are downright quick, too, even if they can be a bit expensive and their 18-mile all-electric range may be of limited use to some drivers.

The XC90 has a comfortable, almost soft ride. Its steering heft is good, and responses are crisp. While not as sharp to drive when pushed as some rivals, the XC90 is more than capable – and it is a top-notch highway cruiser. Few SUVs at any price point are anywhere near this composed, especially with the available air suspension.

The Volvo XC90 is a divine family-friendly crossover SUV that deserves a top spot on any shopping list.